Born Victoria Caroline Adams on April 17, 1974, this pop princess from Essex in the UK went on to have it all.

Even though she was not the best singer, dancer or “looker,” she still managed to be a key part of the hugely successful girl group the Spice Girls. She went on to become a highly successful businesswoman, a model and a fashion icon. To top it all off, she’s married to one of the best-looking and talented soccer players of all time.

Not bad for an ordinary girl from Essex!

Read on to see how you can be inspired by the woman formerly known as Posh Spice.

Beckham has successfully reinvented herself over and over:

The Spice Girl Years: First she transformed herself from small-town girl into Posh Spice, a pop singer in one of the most successful British girl bands ever. The Spice Girls first took the stage in 1994. Although the group split up in 2000 (except for a reunion tour in 2007-8), their songs have remained popular with fans. Their medley of “Wannabe” and “Spice up Your Life” was the most-tweeted moment at the closing ceremony of the 2012 Summer Olympics in London.

Designing Woman: As if that weren’t enough, she then parlayed her talent and high public profile into a role as a successful and style-setting fashion designer. Beckham’s fashion empire includes both upscale and mass-market designs under separate labels. She won the coveted Designer Brand trophy at the November 2011 British Fashion Awards and even served as guest editor for an issue of the French edition of Vogue.

#2 She has aged gracefully

Although she is now over 40 years old, Victoria Beckham has maintained her good looks and slim figure – despite the pressure of looking after four young children, running a business empire and being part of an A-list celebrity couple.

Like many people, Beckham suffered from skin problems as a teen. She has had the strength and self-confidence to get over this setback and become a world-famous and much-imitated beauty. Her openness about overcoming the pain and insecurity of skin problems has served as an inspiration for teens around the world.

Beckham has documented her transition from pop girl to wife and mother in a series of television documentaries, starting with “Victoria’s Secrets” in 2000 and most recently in 2007’s “Victoria Beckham: Coming to America.”

Victoria has been with David Beckham since 1997 (they got married in 1999) which in itself is a remarkable achievement.

Things took a terrible turn the following year when, in the 1998 World Cup in France, Beckham was fouled and retaliated against the responsible player. As a consequence he was taken off the field and England subsequently lost the game. The soccer star became the target of a witch hunt that eventually led to death threats.

Through this dark period Victoria stood solidly by her man.

Likewise, she maintained her dignity and loyalty when Britain’s tabloid press claimed, in 2004, that her husband had indulged in extramarital affairs with his personal assistant and an Australian model.

Victoria Beckham has said that the accusations served to make their marriage stronger. “I’m not going to lie: It was a really tough time,” she told W magazine. “But I realized a lot of people have a price.”

#4 She is not afraid to admit mistakes

Beckham has undergone several cosmetic surgical procedures over the years. At one point she added implants to increase her breast size from a reported 34A to 34DD.

Soon, however, she concluded the surgery had been an error in judgment. She confessed in a British Vogue interview that she had gone under the knife once more to have the procedure reversed. “No torpedo bazookas,” she said in typical good humor. “Gone!”

In her 2001 autobiography, Learning to Fly, Beckham admitted that she had suffered from an eating disorder as a young woman because she was convinced of the importance of being thin. Disclosures like hers help the next generation of young women avoid such traps.

We all make mistakes in life; the key is recognizing them and learning from them.

In 2002, Beckham received death threats prior to a Spice Girls performance at the UK’s “Brit Awards” program. During rehearsals, a red laser targeting dot appeared on her chest. Beckham was hustled offstage and police investigators discovered that a backstage door had been propped open, concluding that an actual assassin had almost certainly been present during the rehearsal. Nonetheless, Beckham went on with the show that evening.

And that’s not all. In 2002 a group of Romanian and Albanian criminals plotted to kidnap Victoria and her sons, and to ransom to them for 5 million British pounds.

The plot came to light when undercover reporters from a British tabloid (the now defunct News of the World) infiltrated the gang and reported it to the police, who arrested five alleged conspirators.

Despite the kidnap and death threats, Victoria has put a brave face on it all and dealt with such terrifying situations with courage.

#6 She doesn’t take herself too seriously

Although she seems to have it all – money, fame, a dream husband, beautiful kids, a successful fashion career – Beckham maintains a great sense of humor that makes her seem likeable and approachable.

Beckham has never been one to take herself too seriously – she is known for laughing at herself loud and often. It is a trait that her many fans and admirers know and love.

That is a habit we would all do well to adopt. Life is far too important to be taken seriously! 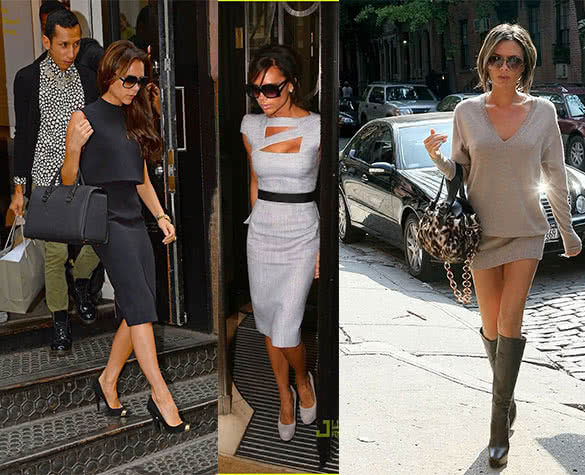 Victoria Beckhams’s influence in the world of style, beauty and fashion is huge. She is known for her fantastic hair, her amazing figure and her great sense of style.

Like all true trend-setters, Beckham occasionally finds herself a step or two ahead of popular tastes. But she maintains a sense of perspective and humor at such times…and sure enough, soon the dress condemned on the red carpet as “too extreme” is now highly sought after on store racks. It’s happened time and again.

Beckham always looks impeccable and never lets the cameras down.

#8 She has great composure

Although she likes to have a good time, Beckham has never been seen falling out of a limo, acting obscenely drunk, or making a scene in a nightclub.

Despite the challenges and huge pressure she has faced, she has never had a public meltdown. Not ever.

During the well-publicized threats to her life and the scandals that rocked her family, she has always maintained a face of good humor, patience and perspective.

These traits are all the more admirable because of how rare they are in the world of celebrity.

She is married to the man they call Golden Balls. Enough said!

At the end of the day, even though she is married to the most famous soccer player in the world, has lived in at least four different countries (England, America, Italy, Spain), has four kids and runs a business empire, Victoria Beckham takes it all in stride. She actually makes it look easy.

We can all take something away from Victoria’s strength and focus during good times and bad.

She really is a super woman for the modern age.