Ever felt butterflies in your belly in a bad way when seeing someone you want to chat with? Maybe so bad you gave up on speaking with them altogether or messed up everything you were saying?

Not to worry: there are ways to start a conversations that will ease the way for you and make it more natural. 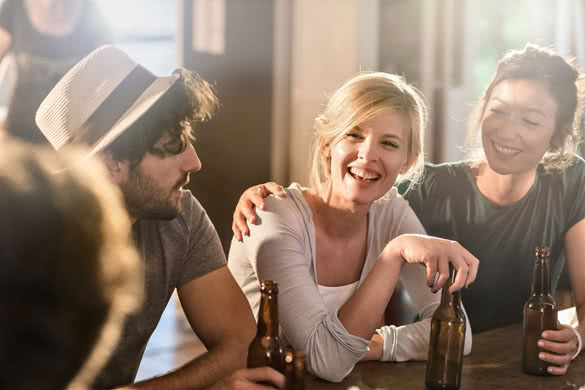 You’re at a bar with a few of your friends and spot a group of guys or two guys you want to chat with. You walk up to them and say you and your friend(s) made a bet that you can guess what they’re drinking. Then, you tell them their drinks.

Don’t attach yourself like a leech. You have to gauge if the guys want to chat with you further; if not, leave after you’ve discussed the drinks.

Even if you leave and the guys want to talk more, they’ll come up to you later in the evening as you’ve broken the ice. Just smile whenever you happen to meet their eye.

At a networking event

You walk in and up to the person you want to talk to and ask if this is the event you were looking for. When they confirm, you introduce yourself, shake hands and ask them about their line of work.

This is not flirty, but as it’s a networking event, you want to start with business. Your mannerism is what will be flirtatious—smiling with confidence and being slightly teasing.

If people are standing in clusters and you’ve already arrived at a location that’s so obviously the right one that it would sound downright stupid to ask about it (it’s OK to be stupid; no one really cares what you say as they all want to have an excuse to talk to someone, but downright stupid is going too far), then just walk up and say something like, “I assume you’re all here for the networking event. I’m Lisa”. It’s simple and it works.

Now, for the gorgeous man you spotted in one of those clusters: you walk up to that cluster and speak to everyone in the group.

After first ignoring him, you say something like, “I don’t think I got to hear what you did”, or “You said you were in x line of work? That’s interesting as…”.

By first ignoring him, you’ve proven you aren’t some leech who will speak to him and only him; you’ve shown you have social skills (talking to the rest of the group) and now you can get to know him better to sense if there’s chemistry. 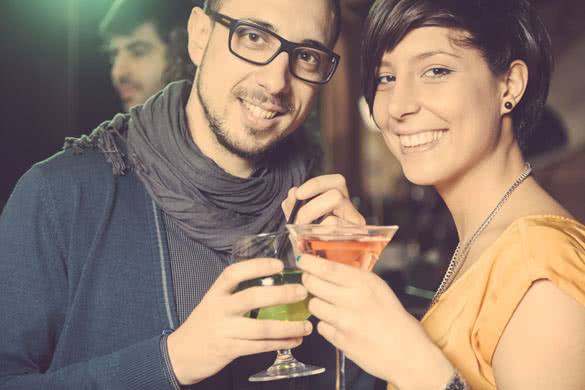 You spot a guy worth drooling over. In fact, you might already be drooling. What to do?

First, chat to some other people. Don’t let him get away, but make sure you’ve made some friends so you feel comfortable first and he sees you’re a social butterfly.

Then, if he’s in a group of girls, walk up and compliment one of the girls on something—likely her clothes or the way she’s done her hair. She says her thank yous and you expand on the topic a bit if possible.

Even if the girls turn out to be a bore, or downright hostile, you can smile at the guy later as you’ve officially spoken to him. If he’s interested, he should then walk over at some point, or you can make an attempt when he’s alone.

The important thing? If there are girls in the group, start off by winning them over. Otherwise you will mentally get bitch slapped if they want him to themselves.

If he’s in a group of guys, you can walk over and ask if anyone has seen your friend whom you’ve lost (she just went to the bathroom). You can follow that with, “She said she was going to the bathroom and now I can’t find her. Typical. She probably walked off with someone and now I’m all alone here”.

If they have any sense of chivalry, they will start chatting to you. Of course, it needs to be said with a twinkle in the eye—you aren’t really feeling all alone. You’re flirting. You can use the same trick in a bar.

At a bar/in the kitchen

If a guy is standing by himself waiting for a drink at a bar, or getting something in the kitchen at a party, order something next to him and say something like, “This party is pretty cool” or, “Funny. Looking at you, I’d never guess you’d order a whiskey and coke”.

If he has any interest/social manners, he will likely ask what you think he’d ordered.

People are self-obsessed. As soon as you start playing psycho-analytical games, you have their attention—even weird things like, “My friend and me made a bet about how much we could guess about people just looking at them tonight. I bet you prefer this kind of music to Rihanna”.

If he says no, just say, “Damn, my friend is starting to up her points on me. Maybe she’s the better mentalist after all?”

Someone you already know 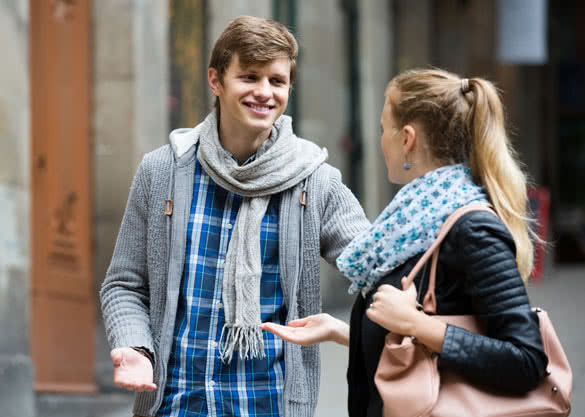 If you already know someone, you can say, “It’s so funny! I was thinking of you yesterday. I saw this big sign for xyz, which reminded me of what you said about xyz”.

What you say to someone is often secondary to your manner of saying it—you need to be friendly (smiling) and confident. If there’s a group of people, address them before you go for the person you want to speak with.

If there are girls in the group, use compliments. Otherwise, if someone want the guy for themselves, they will turn into not so nice women.

If you can, choose topics that will move the conversation along (such as guessing games); if that’s not possible, have a follow up question ready. You can also weave it into an entertaining story about that one time your friend also left you at a bar/where you played a game of guessing and xyz happened.

Never attach yourself to someone—check their body language. It’s better to leave and come back than to overstay your welcome.