Angie B.
1 Comment
Flirting with guys isn’t as hard as you may think! These 10 tactics will help you learn how to hit on a guy and get the attention you are seeking from him.

For less than a confident woman, it can be hard to go after you want, especially when what you want is an extremely attractive, thoughtful and decent man.

Often times as a woman, we’re told to wait until he comes to us and we are taught that chasing him can be seen as desperate or thirsty.

But the thing is, it doesn’t have to be. There can be ways to hit on the guy you’re into. Did you make eye contact with a handsome man on a night out with the girls? Hey, it’s 2016 and we should all be able to go after what we really want no matter what.

These are just a few tips on how to hit on a guy that strikes your fancy. 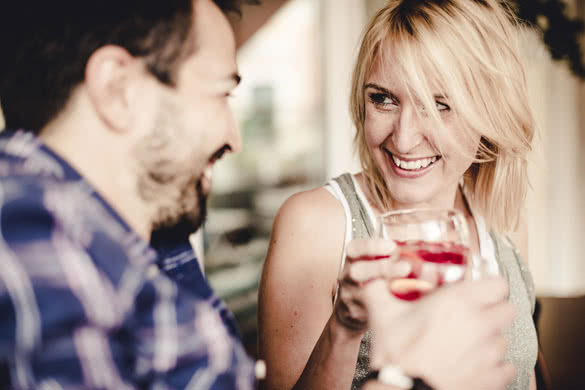 Say you see a guy in a coffee shop around the corner from your place and you really want to get to know him better. You could be too scared to go right up to him and just say hey, so there’s another way to go about it. What would really help you  is to get the conversation started without having to actually be nervous about it.

Ask the guy for directions. You may know the area like the back of your hand but he doesn’t know that. When a man feels needed or helpful in some way he may just try to keep the conversation going. If he doesn’t, you can always keep it going yourself with the “thanks, oh wait have I seen you here before?”

Anything that opens up a conversation is an excellent way to begin hitting on a guy because going right up to him and asking him out might be coming on too strong—that is, of course, depending on the guy.

Guys are wired to be more in tune with touching and/or visuals. If you’re out on the bar and you know you look good, get a friend to ‘accidentally’ push you into him. This will start the whole “hey sorry about that” conversation and maybe lead to more.

Alternatively, you could do something a little more extreme to get this guys attention like falling right in front of him and waiting for him to swoop in. The accidental contact is a good way to hit on a guy if you don’t mind feeling a little silly.

This approach is only for the girls who don’t mind being embarrassed or look clumsy. If you have a problem with looking ‘uncool’, then you’ll want to continue down the list.

3. Find common ground to talk about

If you’re at a sports bar and you’re eyeing a guy, try to figure out which team he’s rooting for. If you’re not that much of a sports fan and are just there for a good time, Google some information about that team.

You won’t have to know every single thing about them but impressing him with a slight knowledge of his favorite hockey team will have you closer to scoring. Hitting on a guy who loves sports isn’t that hard because generally they can always be found in the same place.

Alternatively, if you’re out at a concert, you already know that you both like the same band so you won’t have to pull out your Google skills on this one.

Finding common ground with a guy you like makes it easier for a conversation to flow and be less awkward when you’re trying to take things a bit further.

4. Laugh at his jokes 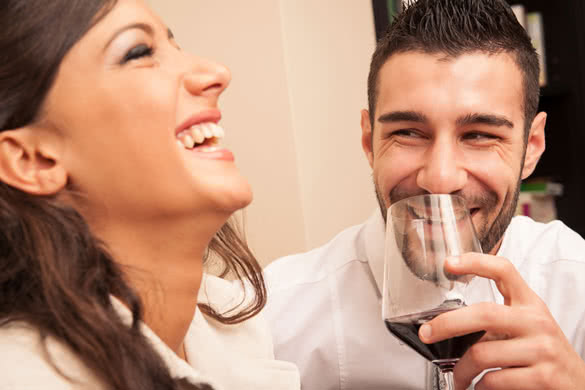 If you’re into this guy, chances are you’re going to find him funny anyway so this one is really effortless. You want to show your interest by making it obvious that you enjoy his company.

Guys tell jokes to impress you and when they make you laugh they love it just as much as you do. The trick here is to let it happen naturally, though. If he tells some horrible joke that you don’t find funny at all, faking it will be obvious.

When this happens, joke with him about how bad the joke was and you’ll still come off as fun, lighthearted and flirty.

Everyone loves a good compliment and that includes the guy you want to hit on. When it comes to making him feel good, it’s as easy as telling him he has nice eyes, a good smile or any other number of visual attributes you find appealing.

A step above compliments based on the way he looks are his choice of drink, his laugh or even calling him funny will allow him to feel good about himself and you for being interested in him.

Compliments are the easiest way to start off something positive with someone. Walk up to the guy you want to get to know and say something like “I noticed you have the best laugh from across the room” or something along those lines. He’ll thank you for it and you can continue on with a nice conversation.

Small talk can be the worst of the worst when it comes to chatting with someone you’re interested in getting to know but it can be good for opening the door to more meaningful conversation. Next time you’re sitting next to that hottie on the subway, nudge him and say “Mondays, am I right?”.

If you’re both on the same subway chances are you’ve crossed paths before or even work on the same schedule and he probably likes his weekends just as much as the next guy so opening up with small talk about the day of the week or even the weather will break the ice.

Be sure to branch off of small talk though because you don’t want the conversation to fizzle out before you get to the good stuff.

7. The old “have we met before” trick

Another good way to hit on a guy and show that you’re interested in talking to him is making eye contact and then asking him if you’ve seen him around or if you’ve met before. Both of you know that you haven’t, of course, but it will allow him to open the conversation with you.

His response will be either “I don’t think so,” or the polite “Maybe, I’m not sure” so either way you’re in to start flirting by playing with your hair and making flirty eyes at him.

8. Ask him about the neighborhood 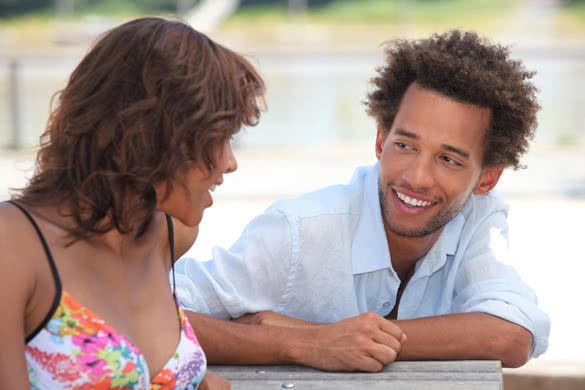 If you’re new to the area and see the guy you’re into every morning at your local coffee shop while waiting in like nudge him and ask him if he knows of any other good places to eat or hang out in the area.

He’ll be happy to help you figure out what’s good on the local scene and it may even give him the confidence to show you around the neighborhood, which definitely counts as a date.

Even if you’re not new to the area, you could still try this approach because it opens the lines of communication for further conversations and then a date.

If you don’t mind strutting your confident stuff right up to a guy and aren’t scared of rejection, the best and possibly easiest approach is just straight up saying you’re into him. Walk up to him and ask him out or tell him how attractive you find him.

There’s nothing wrong with a bold, confident woman and a lot of men will even find it sexy that you had the lady balls to hit on him in the first place. The bold approach isn’t for everyone but it will definitely get you an answer a lot faster than any other.

If you’re not into doing any on this list, you may be shy. But that’s alright. There’s still a way you can hit on the guy you’re interested in without having to go all in.

When you spot him in the bar or from across whatever event you’re attending, slowly make your way to his side of the room. Instead of going straight for it, you’ll force him to notice you. Make eye contact with your prospect and when he locks eyes, flash him those pearly whites and wait for him to come to you.

There’s nothing wrong with going for the guy you like and the shy approach is effortless.

These 10 ways to hit on a guy may just make your night out that much more fun. You have all the tools and options to go ahead and finally try to make your move. When it comes to hitting on guys, what approach do you like the best? Tell us in the comments!

Man Reveals: How To Find A Nice Guy
Things Guys Notice When They First Meet You
Comment