Sarah
7 Comments
Ladies with ink are not such a rare sight any more. Every year there is more of us with tattoos. Are you looking for a perfect design for you? Choose one of these top 15 best tattoo designs for women.

1. The One That Means Something to You

Before I even start with the most popular tattoo designs among women, I absolutely have to tell you that choosing a design should be based on things you love and things that mean something to you. No matter how much is a certain design popular, or how good it would look on you, if it has no meaning, you’ll be bored pretty soon. On the other hand, if something that is completely not feminine has a certain meaning to you – that’s your best design.

It’s always better to choose a tattoo design with a meaning, than according to what is considered masculine or feminine. If you want to girl it up, rather do that with some details or choose a more feminine place.

I have at least five female friends that at a certain point in their lives said, that if they would ever get a tattoo it would be cherry blossom. This is one of the most popular tattoo designs among women, and there’s a good reason. Cherry blossoms are beautiful and extremely feminine.

The most popular places for cherry blossom tattoos are back, ribs, wrists, and ankles. They are more often done in color than in black and gray because they have this wonderful pink shade that looks great on girls’ skin. In Japanese culture, cherry blossom is a symbol of life, while in Chinese it represents feminine principal, love and female beauty, and sexuality.

Among best tattoo designs for women is, of course, a floral design. Almost every girl that has tattoos has at least one flower.

Different flowers have different meanings. Chrysanthemum, for example, is a symbol of perfection, but it’s also a flower of death in Japanese culture. Hibiscus flower stands for delicate beauty and seizing the moment. Rose and lotus flower have same meanings in the west and in the east – they are symbols of pure love.

Floral designs could really differ and they are perfect at almost every part of your body. Choose between color, and black and gray and get a flower that suits you best.

Vine tattoos could be the extension of floral tattoos or they could be a completely separate design. They are usually big tattoos, either on your back, your ribs or around your ankles. They have somewhat swirly texture and they follow the natural curves of your body, so they really look fantastic.

Vines represent bonds, love, and commitment. Ivy represents immortality, but also a strong bond with another person. Ivy grows only around another tree, but unlike mistletoe, it doesn’t kill the tree. They live together. It is also a symbol of strength, and it’s thought to bring good luck and joy.

Butterflies are maybe the most common tattoo design among girls. Previously known as “the tramp stamp”, butterfly tattoos are no longer considered to have that meaning. Today they are mostly considered to be symbols of beauty and love.

One of the most popular places to get a butterfly tattoo is – hips. Either one, or symmetrically two butterflies on each hip, these tattoos are only visible when you’re in underwear or swimming suit, but they really do look beautiful. I would definitely suggest choosing a full color rather than black and gray for a butterfly tattoo. That way, you’ll get all the magnificence of the colors that make butterflies so beautiful in the first place. 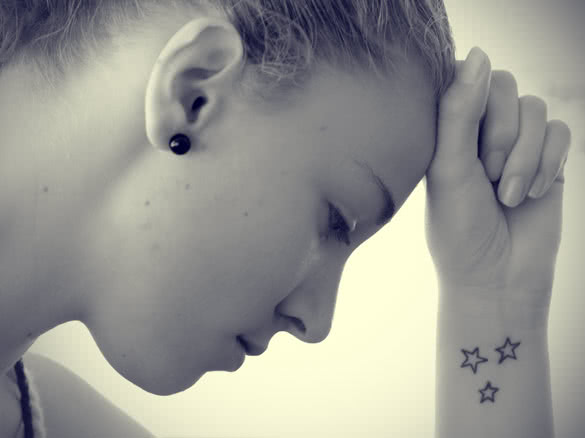 Either as a standalone tattoo or incorporated in another design, stars are one of the best tattoo designs for women. They vary from one little barely visible star to a starry vine across your whole back. In any case, they are beautiful.

Being the light that shines in the darkness, stars are considered to be symbols of truth and hope. They represent a fight with the darkness and a hope for a new, better, path, and are often seen on people that have gone through some tough times in their lives. Stars also represent happiness and our wishes.

Star tattoos are done anywhere on the body, but in my opinion, the best places are – a couple of stars behind your ear or a small vine of stars on your neck.

The symbol of spring, and one of the most traditional tattoos, swallows are also quite popular among girls with ink. They represent hope, but they are both a symbol of good and bad luck. They are a sign of new love, fertility, and renewal, but, in some mythologies, they carry the souls of dead children.

On the other hand, swallows mate for life and are a symbol of everlasting love between two people. They are mostly done on the lower back or on the scapula, and sometimes they carry something in their beaks. What they carry could represent more about the tattoo than the swallow itself.

Every little girl believed in fairies and wanted to be one. Some of us keep this wish even when they grow up. No matter if you still believe in fairies or not, this is a very nice tattoo design for women.

Fairies could either be a symbol of popular modern culture – we all know about Tinkerbell – or mythical creatures that represent human wishes and desires. Fairies are thought to be the inspiration for artists and poets, but also to be a symbol for people who wish to keep their inner child as long as possible. They are free, beautiful and magical, so it’s no wonder this is a very popular tattoo design.

Not only among women, but also among men, zodiac signs are one of the most common tattoos. The meaning is very clear, it’s your zodiac sign after all, but you can choose to do a Chinese or Celtic zodiac sign.

In any case, zodiac tattoos are usually small and mostly placed on wrists or behind ears. They are mostly done in black and gray.

Coming last but most certainly not the least – heart is one of the best tattoo designs for women. They are done in a number of different ways and in different places, but they almost always have only one meaning and that is love.

Love could be a happy or a sad one, so people choose whole or broken hearts. One of the most common and traditional tattoo designs is a red heart with a ribbon and a name.

I would not suggest doing this because I generally don’t suggest putting anyone’s name on your tattoo – you never know what might happen. But still, a heart could be a very pretty design and yes – you should do it in color. A heart has to be red after all.

Greatly popular thanks to Angelina Jolie and Megan Fox; tattoos in a form of text are one of the top tattoo designs for women. The meaning is in a lot of cases of religious or inspiring nature because girls tend to pick quotes that will give them a confidence boost.

Choose your text wisely. Don’t make it too long and don’t choose a font that’s unreadable. Watch our carefully for any possible spelling mistakes, they can’t be changed later. If you’re choosing a quote on a language other than English, make sure you’re completely certain about the meaning.

Thanks to another celebrity, this time Miley Cyrus, dream catcher tattoos are gaining popularity among girls. This is truly a beautiful tattoo design and it is very popular among Native Americans, men and women alike.

Another design popular with girls is feathers. No matter if they carry a significant meaning for you or you simply like the way they look, a feather tattoo will surely look nice on you.

Watch out for the meaning, though – a crow feather symbolizes death in many mythologies, while on the other hand, a dove feather carries a meaning of peace and serenity. One of the most common feather tattoo design is a peacock feather. It is beautiful and also meaningful and a lot of girls choose it for both reasons.

Popular with boys and girls alike, religious motifs find their place on tattoos of many people. Although I personally don’t think that you should do this, not only because you might change your mind about religion later in life, but also because a lot of religions actually think that tattooing is sacrilege, if you’re sure about it – go for it.

No matter your religious beliefs, I’m sure you can find a motif that suits you best. It might even come from a religion other than the one you grew up with. If it carries a symbolism meaningful to you, it doesn’t matter where the origins of it are.

Although ladies are usually not very fond of insects, this one seems to be winning the hearts of girls around the globe. The dragonfly tattoo design is actually one of the favorites among women in America.

If you choose to have a dragonfly tattooed I have to suggest opting for a full-color tattoo and finding a REALLY good artist. Dragonflies live for only 24 hours and this tattoo design is usually a symbol of how life is short and we should take the most of it. Dragonflies come from the same realm as butterflies and fairies, so you can even try a design that combines two or all three of them. Visit this link for more information about dragonfly tattoo meaning and for some really cool dragonfly tattoo designs.

Whichever design you choose; make sure that you are ok both with the appearance and with the meaning of it. Find a good tattoo artist and don’t be afraid to speak your mind. After all, it is something that will stay on your skin for the rest of your life and you deserve it to be nothing less than perfect.

Wear your ink with pride and feel free to share your new tattoo experience with the rest of us.

Can You Wear Black to a Wedding?
How to Stay in Shape While Pregnant
Comment