Jessica
Add Comment
Learn More About the Many Benefits of Green Tea and How to Make it Properly.

Green tea is obtained from the leaves of a plant known as Camellia sinensis, whose consumption has origins in China and Japan, of more than 3000 years ago. Ancient Chinese medicine men wrote about the benefits of this plant early in the 2nd century a.c., while the Portuguese explorers who have reached Japan in the 16th century, said they have used this tea to cure headache, stomachache, fever and articular pains. But for many centuries no other culture, except for those in the Middle East, has given much importance to this beverage.

It was just some years ago when different medical researches have scientifically proved all of its benefits. Now it is grown and produced worldwide and besides water, it is the most consumed beverage on the planet. It is also one of the most complex herbs used in the pharmaceutical industry.

Substances present in green tea known as catechins are strong and efficient antioxidants that are many times more powerful than vitamin E and vitamin C. Green tea also contains caffeine, theobromine (an excitant) and L-theanine (a unique amino acid of green tea known for its relaxation effect).

One of the most interesting aspects of green tea lies in its anti-cancer properties. The consumption of green tea in Japan, much greater than in all other countries, has considerably reduced cancer incidence in both men and women. Particularly low seems to be also the number of lung cancer cases in Japan. However, it has been scientifically proved that green tea has a protective effect against cancerogenesis, if consumed from the start.

Green Tea and Its Anti-Aging Effects 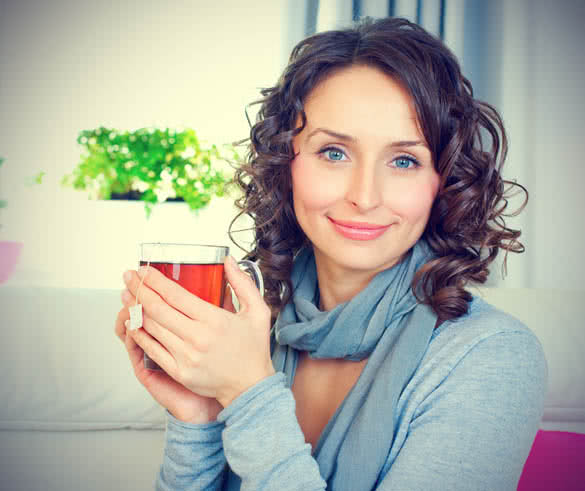 Anti-aging effects of green tea are due to its high content of flavonoids, which are very strong in protecting the heart and in fighting free radicals, responsible for skin aging. It reinforces the immune system and slows down the aging process. Scientists are now working on a particular catechin of green tea, called EGCG (epigallocatechin gallate). It seems that EGCG has very strong antioxidant capabilities and that it helps reactivate dying skin cells.

Green tea regulates your metabolism, enhances the intestinal flora (it is a very powerful antibacterial), and helps lose weight. It reduces the sugar absorption, while its polyphenols make your body produce heat that burns fat.

The benefits of green tea are multiple and it’s hard to mention all of them at once. It has been proved that it assures good liver functioning, lowers blood pressure, alleviates headaches and protects against digestive and respiratory infections. It is also indicated for treating osteoporosis and it accelerates all healing processes. A new research suggests that it may be helpful in reducing periodontal disease and in preserving teeth.

How to Make Green Tea Properly

In order to maintain and not destroy the active ingredients of green tea, you need to boil the water and then allow it to cool down to 80°C (which is just bellow boiling), pour it over the tea leaves, cover and infuse for 3 minutes.

Don’t forget that green tea contains a moderate quantity of caffeine, and may cause nervousness and anxiety. The recommended amount of green tea is two to three cups per day.

Have you found out everything you wanted to know about the benefits of green tea? Let us know in the comments.