Maria Montgomery
Add Comment
Sisters are those people you love, but can’t live with and can’t live without. Read on for some hilarious and thoughtful quotes about sisters.

Sisters are a blessing. That’s to say, until they annoy you till you see red, or get angry with you for, say, stealing half their wardrobe when going on a date. On the other hand, when they are in a good mood, they will probably give you half their wardrobe and then some, do your make-up and even share their Louboutin’s so that you can impress that special someone.

And whilst they can say all kinds of nasty things to you, chances are they will attack anyone who as much as dear insult you. 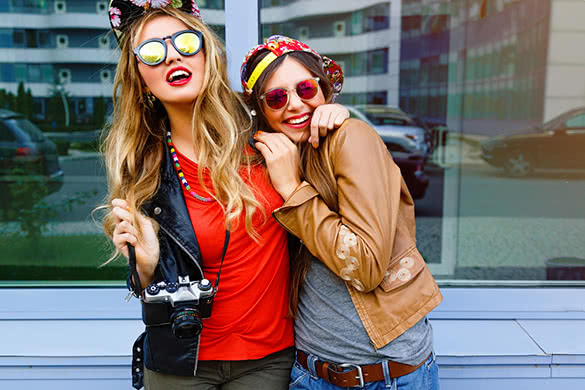 Sisters usually know you very, very well, but they may be your polar opposite in many ways. For better or worse – you will find strength in each other’s differences, but also argue about them.

Of course, there are sisters that are a pain, full stop, and some are closer to their sisters than others, but if you have a sister that you are on friendly terms with (for the most part), then you are likely to recognize yourself in the funny quotes about sisters below. Some poignant ones might also make you tear up a bit. Sisters are, after all, a special breed. 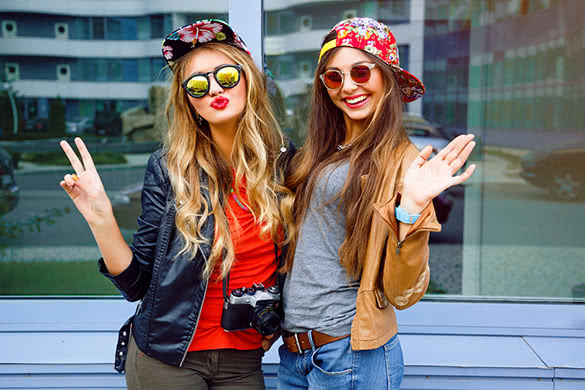 When it comes to sisters, there is some vital advice to bear in mind. You will want to remember it, or you will end up in trouble/pain. You see, sisters are great. Until they get cross with you (or your parents love for you) or decide you have a superior wardrobe that they are entitled to.

This is when things start going wrong, at least for five minutes, or so. And that’s when you must absolutely refrain from having them give you advice, do your make-up, or comb your hair. 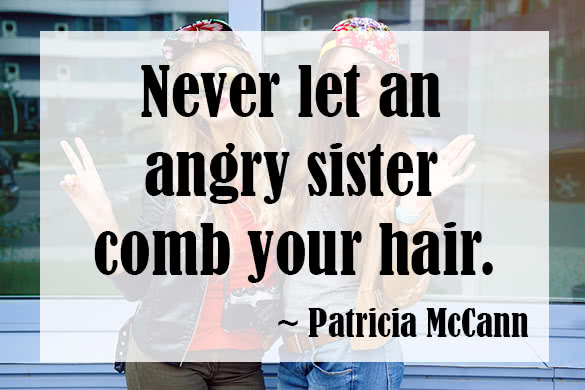 Whilst typewriters have gone out of fashion (though they look really cool on vintage photos), we can all remember what they sounded like when you hammered away on them. At least if you, like me, stole your grandparents’ old ones. I liked the feel of typing on them, but I can only imagine the frustration of people around me… And sisters can be very, very annoying too.

Chances are they figure out what you dislike the most and then go at it with all their might, just to see you get annoyed. They will take perverse pleasure in this, especially if you have, say, stolen something from their wardrobe as of late.

Of course, sometimes you love hearing your sister play the piano, however out of tune it sounds, as you love your sister and appreciate her efforts. It all depends on the reasons for playing the piano in the first place.

The typewriting machine, when played with expression, is no more annoying than the piano when played by a sister or near relation. ~ Oscar Wilde 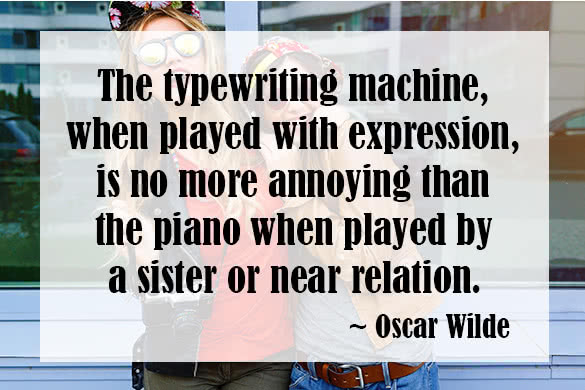 One of the greatest pleasures of having a sister is the ability to blame her for everything. Absolutely everything! Apart from, possibly, the things you know your parents would never believe she would do. The problem with this? She will blame you for everything she did, and if she gets up to more trouble than you, then, well, you are in trouble.

Sometimes you will probably also enjoy telling your parents your sister did something which she truly did, because, let’s face it – she’s been a pain as of late.

Whatever it is ….my sister did it! ~ Anonymous 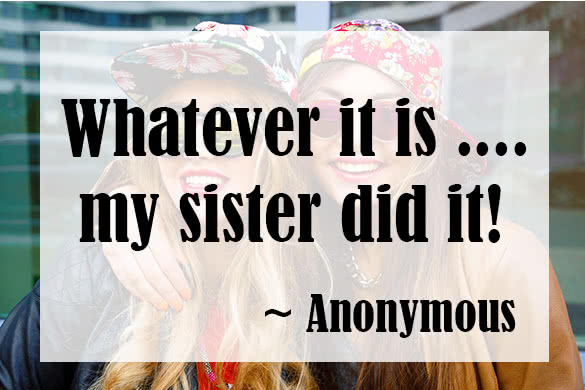 It was nice growing up with someone like you – someone to lean on, someone to count on… someone to tell on! ~ Anonymous 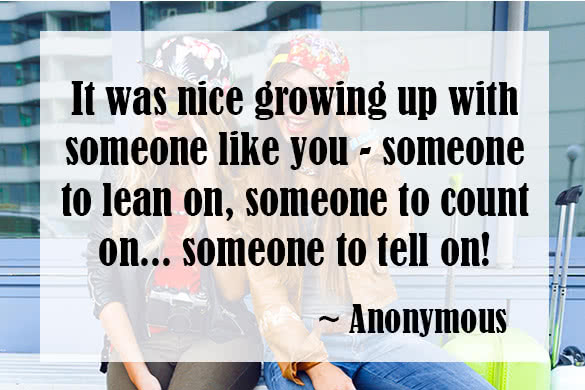 You can, of course, also argue that your sister made you do something. This sometimes works as a great strategy. And sometimes backfires like nothing else, showing your weak character, because unless you were weak, why would you let your sister boss you around?

My sister made me do it! ~ Anonymous 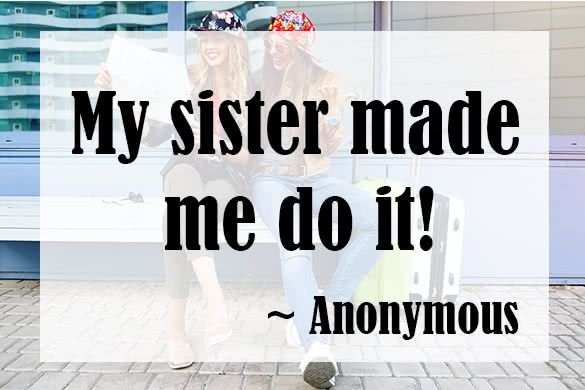 For better or worse

They say marriage is a pretty serious commitment. Try having blood relatives. No matter what you do, they are still your relatives by the end of the day. The expression “for better or worse” takes on a whole new meaning. There is no divorce possible in this case, except maybe changing your name and moving to a new town. But you will still be sisters, forever and ever.

This sometimes works in your favor as sisters usually decide to help you out in times of trouble, even if they were angry with you yesterday. As they know they can’t get rid of your sisterhood, they sometimes work just a little bit harder to make the wrongs right.

Having a sister is like having a best friend you can't get rid of. You know whatever you do, they'll still be there. ~ Amy Li 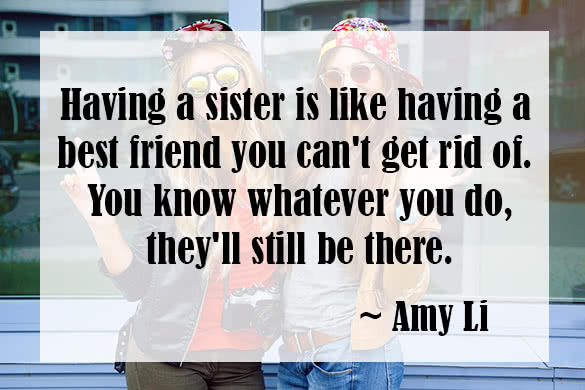 The laid off clothes

There is true love, and then there’s the true love coming from a sister. It involves things like laid off clothes. And if you were the younger one, you might just have been hoping your sister would grow very quickly one year, so that you could get your paws on those designer jeans she bought…

I know my older sister loves me because she gives me all her old clothes and has to go out and buy new ones. ~ Anonymous author, attributed to a 4-year-old named Lauren 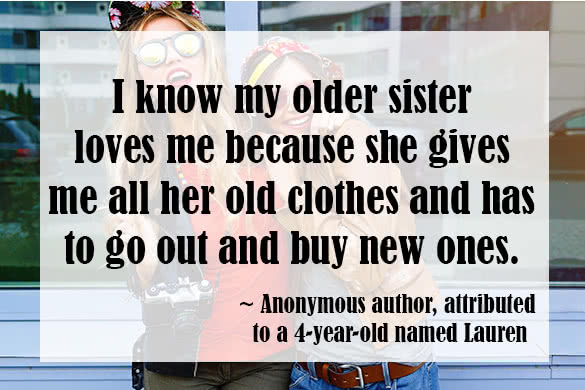 Closeness means the right to laugh

Likewise, the closer someone is to you, the more they will laugh with you when you fall…and pick you up straight afterwards.

You and I are sisters. Always remember that if you fall I will pick you up… after I finish laughing. ~ Anonymous 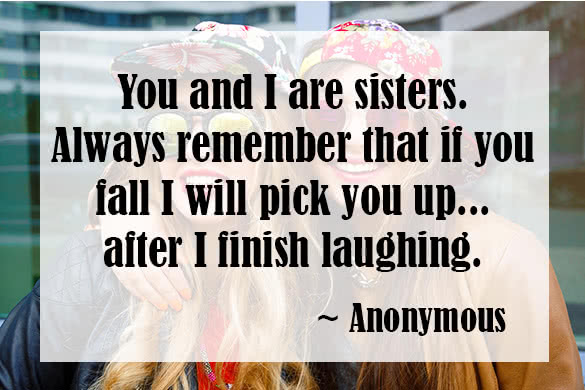 There’s nothing more interesting than poking fun at someone who you know can handle it. You are laughing at them as if they were the best comedy in town, because, well, everyone screws up sometimes, and if it’s your sister, you get to see it firsthand. You love them so much, you feel you have the right to pick on them.

Should, however, anyone else try that, you will either attack them verbally or physically, because clearly, they don’t love your sister as much as you do, so how dare they hurt them with insulting comments?

Older siblings… The only people who will pick on you for their own entertainment and beat up anyone else who tries. ~ Anonymous 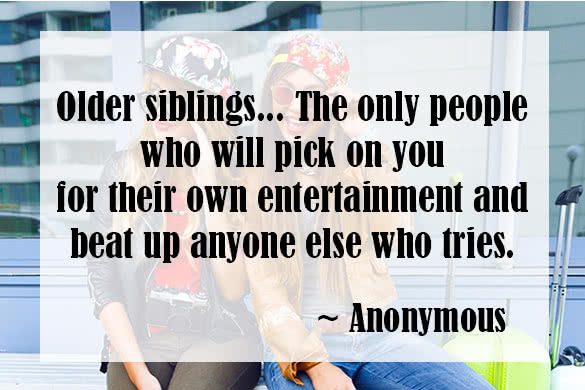 Being the big sister

If you are the older one, you know your younger sister(s) looked to you as their hero when they were little. At least up to a certain age when they hadn’t yet figured out you were the yin to their yang, and they started despising the differences. You probably also used this hero worship to the best of your ability, like bossing them around 24/7.

I am the big sister which makes me the boss! ~ Anonymous 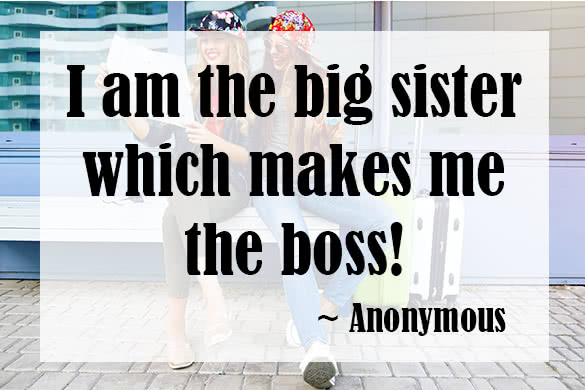 Having a sister is great because there are so many things you can borrow from her when you run out of stock, or simply don’t have the item in the first place. Like her gorgeous new sweater that would go simply perfect with your new shoes for that party you are going to.

Of course, your sister may sometimes object to you borrowing things. This is when you decide to borrow them when she isn’t watching. It’s not really stealing. I mean, you intend to hand it back, even if it has ketchup on it by that stage.

If your sister is in a tearing hurry to go out and cannot catch your eye, she's wearing your best sweater. ~ Pam Brown 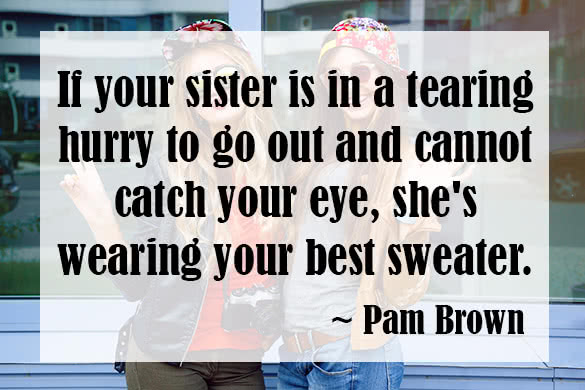 I don’t know about you, but I find that no matter what charades you put on, those close to you always see straight through them. It can be great and also a hassle. You don’t necessarily want to bring up that you just broke up with your boyfriend on your sister’s wedding day, but, alas, she will know anyway.

You can kid the world, but not your sister. ~ Charlotte Gray 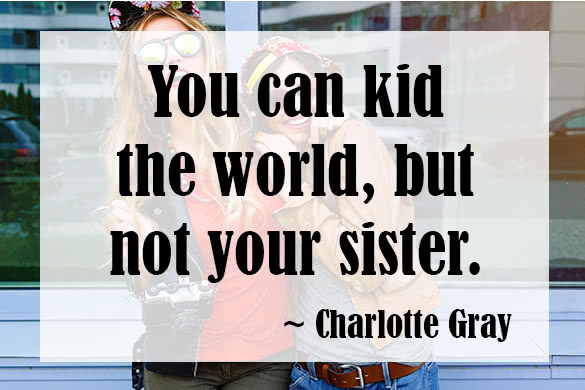 The thing with this is also that whilst your parents may not know what you were doing last night, your sister probably does. Which could be used against you in so many ways, it’s best not to mention them all. But let’s just say that if she decides to tell, you might end up with house arrest for a year. If she is the blackmailing kind, this could be used against you to no end.

“More than Santa Claus, your sister knows when you've been bad and good.” – Linda Sunshine 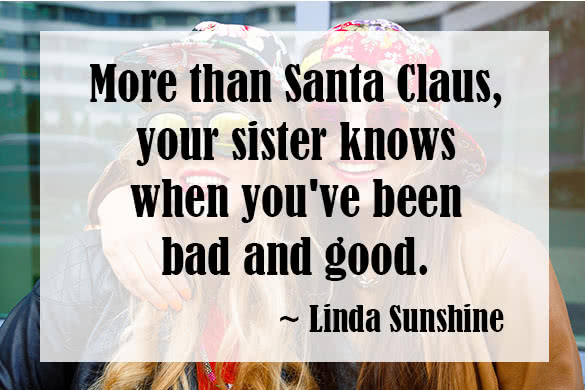 “Sisters remember things you would rather forget, in graphic detail… With proof.” – Unknown 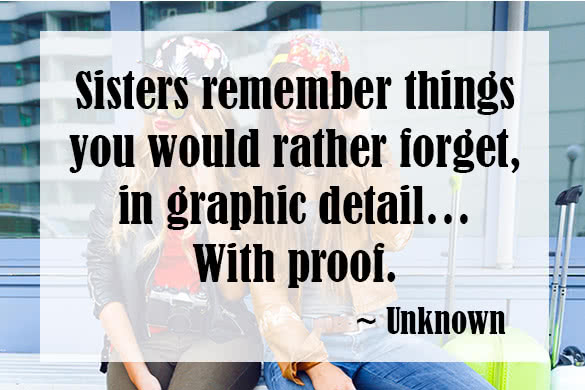 There’s no way to truly describe your sister, but Molly in the quote below gets pretty close, don’t you think? And there’s some truth to sisters being polar opposites, at least in my family.

Also, if you grew up with someone who adored and idolized you, but also told on you to get more praise herself, blackmailed you when you had done something your parents didn’t know, stood up for you when no one else did, stole your clothes, and understood exactly where you came from, yet was your polar opposite, and argued with you endlessly, then you would probably understand why you love her and want to wring her neck at the same time. 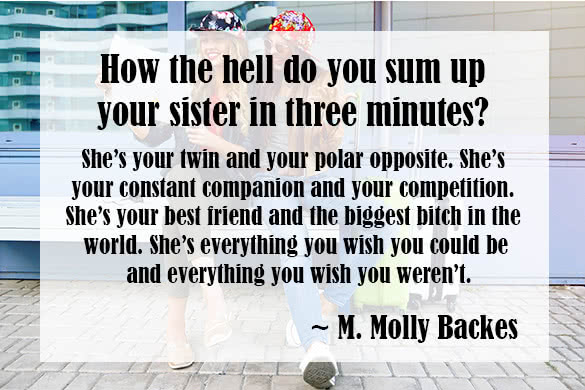 Sisters may share the same mother and father but appear to come from different families. ~ Unknown 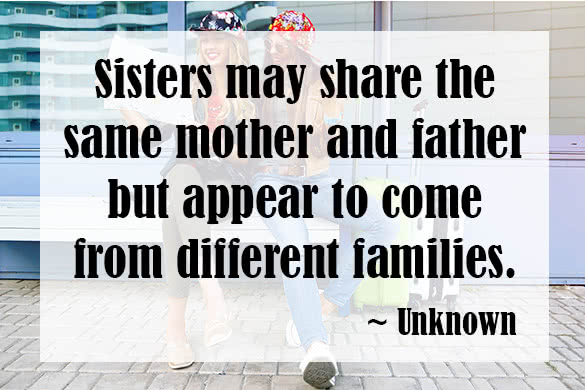 If you don't understand how a woman could both love her sister dearly and want to wring her neck at the same time, then you were probably an only child. ~ Linda Sunshine 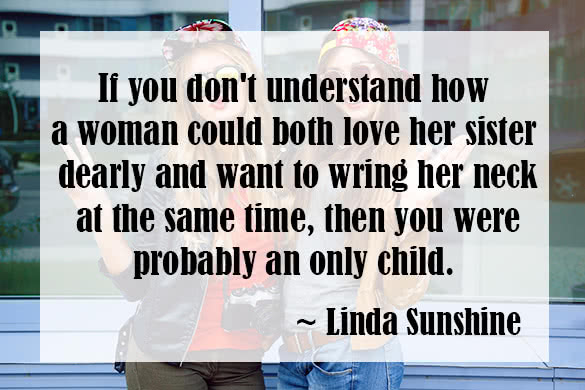 Older sisters will usually try to educate the younger ones. Sometimes that includes getting drunk at parties; other times how to do your maths homework. It depends on the sister. But there will be education – for better or worse.

My sister taught me everything I really need to know, and she was only in sixth grade at the time. – Linda Sunshine 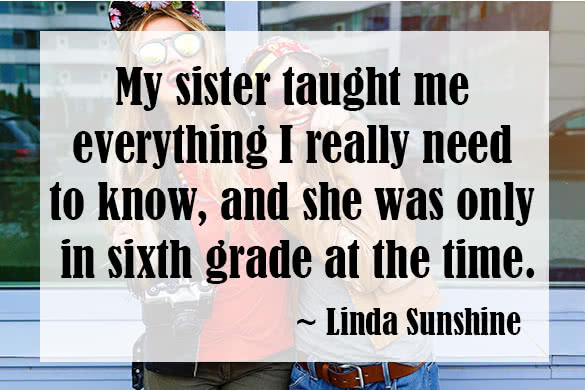 There will always be competition between siblings at some stage because parents can’t focus all their attention on both at the same time. And kids want attention…as much as possible.

If sisters were free to express how they really feel, parents would hear this: ‘Give me all the attention and all the toys and send Rebecca to live with Grandma'. ~ Linda Sunshine 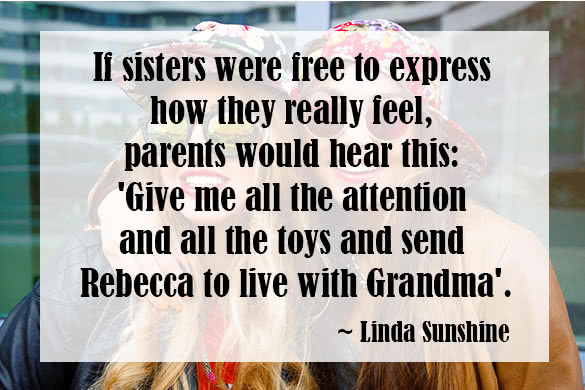 Sisters are there for each other

As much as you sometimes may loathe them, sisters tend to stick around and know you a little better than you think. Whilst friends may come and go, there is something about a sister who shared the same childhood, no matter how terrible, which makes her stick around.

And if you only open your hearts to each other, even if you are each other’s polar opposites, you tend to gain strength from each other as you understand each other’s childhood wounds, sorrows and joys. You know the patterns that shaped you growing up; the demons you battle and the talents you harbor.

When dealing with parents as well, your sister will likely understand you better. You may even get her on your side to be able to handle your parents when you tell them you are moving to the other side of the world, or are dating a man you know they won’t be thrilled about.

A sister is a gift to the heart, a friend to the spirit, a golden thread to the meaning of life. ~ Isadora James 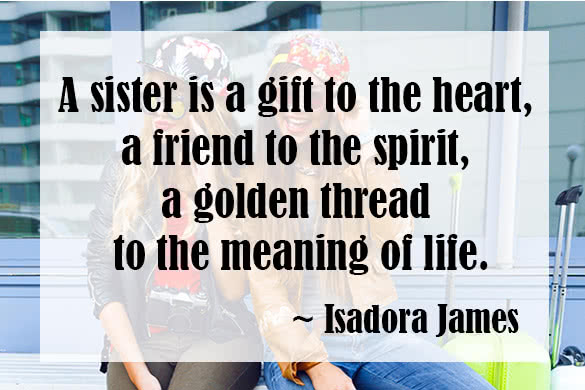