Trina
Add Comment
You are very close to your best friend, but he’s spending more time with someone else and leaving you out. You are jealous of his new girlfriend? Find out if you’re in love with your best friend!

It can be hard to separate love from friendship sometimes, and even harder when you’re trying to figure out if you’re in love with your best friend or just feeling those strong ties of friendship.

There’s always some point in our life when we start to question our feelings, nights when we’re lying in bed thinking back to that amazing night at the Black Keys concert, or the way you finish each other’s sentences and have inside jokes nobody else understands.

Confusing love with friendship isn’t uncommon. However, before you go and tell your best friend that you love him and want to be more, you should really ask yourself “Am I in love with my best friend?” Well, we hope these questions help you realize your true feelings.

1. How do you feel about his dates?

When he’s out with a woman, how do you really feel about it? Are you jealous of every girl he’s ever dated? Do you try to sabotage his relationships? If so, then you are in love with your best friend and you probably don’t even realize what you’re doing.

By trying to sabotage his relationships you’re crossing the line from “friend” to “psycho”. Instead of being the bad girl, how about just telling him how you feel?

If, on the other hand, you’re actually happy when he’s with a good woman, and not afraid to tell him when he’s with someone that is completely wrong for him, you’re probably just being a good friend. A little bit of jealousy is normal when someone else is taking up your bestie’s attention, but if you can separate the good from the bad girls he dates, then you’re really just being a good friend.

2. Are his girlfriends jealous of you?

If his girlfriends are always jealous of you, then you might have a connection with him that’s deeper than you know. There are many men and women who have best friends of the opposite sex, and while some girlfriends might get a little jealous (usually the insecure ones), for the most part, it’s nothing their significant other worries about.

If all of his dates are giving you the stink eye, though, then I’d say there are some feelings there between you and your best friend that maybe you’re not acknowledging.

3. Has there ever been a chance of the two of you together?

Was there ever a time in your friendship when you two might have become a couple? Maybe you shared a kiss in a moment of emotion, or perhaps one night of crying in his arms led to a night in bed? Maybe he confessed some hidden feelings when he’d had a few too many beers one night?

Whatever the case may be, if there was ever a chance of being a couple with this guy, you might think of him as more than a friend. Once those loving feelings are initiated, it’s difficult to move past them and go back to just being friends.

4. Is he always the first person you think of?

We almost always think about our best friend before anyone else when we have something juicy to say. Whether it’s the latest gossip on your crazy ex-boyfriend or the fact that you finally accomplished your goal of getting that promotion, your best friend is always the one you want to tell first. That’s normal friend stuff.

On the other hand, if you’re constantly thinking about him and wondering what he’s doing that night, or if you can’t wait to see him every day, even when there’s nothing new to talk about, then you probably have more feelings for him than you realize.

Falling in love with someone isn’t just about being friends and sharing all the news, it’s about wanting to see that person every day for no reason at all.

5. Do you feel awkward when you’re being “one of the guys”?

No doubt you and your best friend banter back and forth. In fact, I’m sure there’s nothing new about giving him a playful punch in the arm or him teasing you about your uncool bedhead look. How do you feel, though, when he does it in front of others?

If you are being treated the same way in private and in front of his friends and you have no problem with that, then you’re not in love with him. You see, instinctively, we want the man we fall for to treat us different than he treats his friends.

6. Is there sexual attraction? 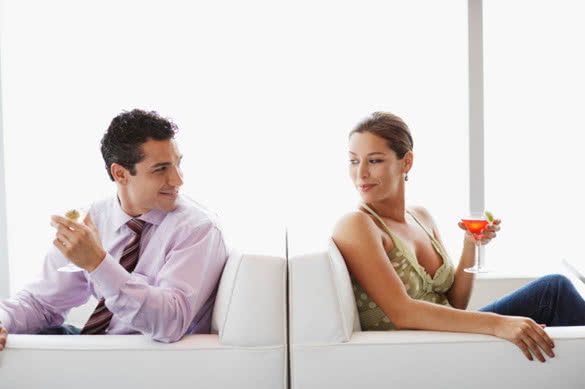 It’s also really easy to confuse love and lust. For me, I find that there are two zones: The “friend” zone and the “I’d sleep with him” zone. I would never be able to sleep with someone I just think of as a friend. No matter how hot he might be to everyone else, if he’s my pal then he’s my pal and nothing more.

Before you confess your feelings, I should warn you that if he doesn’t feel the same way, your friendship will never be the same. Never! Also, if you end up together and then break up later, you will never be able to be friends again. I’ve had both happen over the years, and lost two of my dearest best friends because of it.

Be sure about how you feel before you make your move, and then be sure you can handle the worst case scenario before you take the risk. On the other hand, isn’t he worth the risk?

Why Do Men Like Curvy Women: 10 Real Reasons
Body Language of Men in Love: 15 Things to Pay Attention to
Comment