Aya Tsintziras
Add Comment
Every woman feels like she has to stay put for several hours if she's on a first date. But, there's really no reason to stay if the things aren't going well

Dating can be super awkward. Let’s just get that out of the way. Whether you are online dating and meeting someone that you don’t know for a drink or are spending time with a guy that you already know, you are bound to experience some awkward moments or silences.

Sometimes, though, a first date is not only awkward but absolutely horrible. So what are you going to do? Sit there and drink your red wine and smile while thinking that you wished you were at home on your couch watching Netflix? Sure, that might be your go-to approach, but you honestly don’t have to stick around. Read on to find out the times when you can leave a date after 10 minutes.

1) When he is insulting or lecturing you 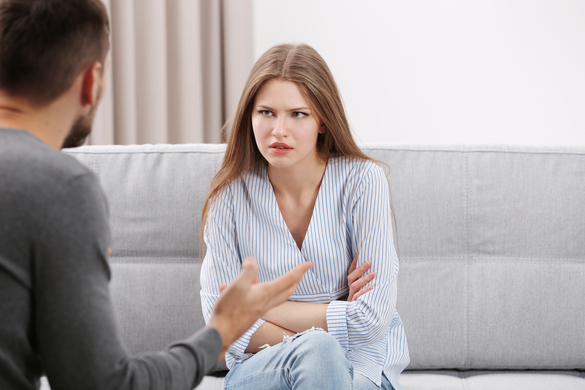 You might not think that someone would insult you or lecture you on a first date. Of course, you would be wrong. Some people are just awful and they are badly behaved no matter where they are or who they are talking to. They don’t care about making a good first impression or trying to get you to like them.

If a guy is insulting you, then why would you want to stay? You’re not going to want to see him again, so you might as well put a $10 bill down on the table (for the wine that you ordered because you want to be classy and take care of your bill) and head home. There’s literally no reason to sit there and be insulted.

The same thing goes for if he is lecturing you. This is also called “mansplaining.” If your date talks to you like he knows more than you about your life or your career, you can absolutely get out of there. He’s not someone that you want to know and talk to.

2) When you feel unsafe

Safety is an incredibly important thing when it comes to dating. If you feel unsafe sitting across from someone, you need to listen to your gut instincts and go home. Sometimes your date will say something that totally freaks you out and you will be way too uncomfortable to stay on the date. Other times, it will be a feeling that you have.

You might feel like you’re crazy or weird for getting such a bad vibe from someone that you have honestly just met ten minutes ago. You’re not crazy or weird. That’s something that you need to tell yourself over and over again or as many times as it takes until you get used to it.

It’s better to be safe than sorry, right? Make a quick exit and forget about your date. He’s not a part of your life and you don’t have to ever see him again. Phew. 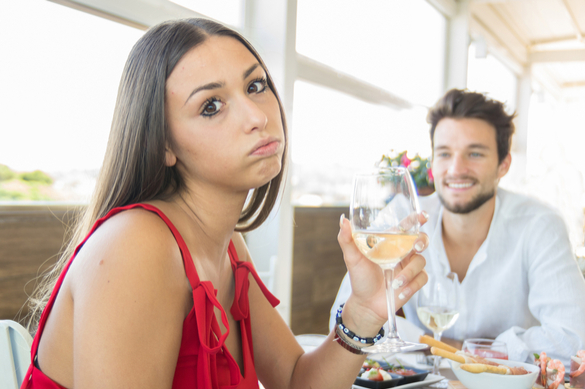 Dates are supposed to be about getting to know each other and having a conversation. Conversations need two people to keep going. If you’re the only one talking, then it’s not an actual conversation, it’s a monologue. Of course, if you’re the only one talking on a first date, that’s because your date is either refusing to talk (because he’s bored or just a jerk) or he’s too shy to go on dates. It’s not your fault and it’s not something that you can control.

You can leave after ten minutes if this is happening. You really don’t need to think twice about it.

4) When he won’t stop talking about dating

The super awkward thing about going on a first date is that sometimes, your date will bring that up. He will talk about his online dating experiences and he’ll tell you often he goes on dates. He might even ask what your approach is and what your ex-boyfriends are like. The worst is when he talks about his ex-girlfriends and what he hates about them. That’s honestly when you want to run in the other direction.

You don’t have to talk about things that you don’t want to talk about ever, especially on a first date. You have every right to want to just have a fun, light-hearted chat about your lives and your jobs and your family and friends and favorite TV shows and movies. It’s okay to not want to delve deep into dating issues or what it means to be in a relationship.

5) When you run out of conversation topics in 10 minutes

First dates aren’t always the stuff of movies, and while that sucks, it’s just something that you have to accept. You and the person sitting across from you are going to be at least a little bit nervous. Nerves stop you from being 100 percent yourself and totally relaxing and making an awesome connection. That’s okay. As long as you and your date get along and are attracted to each other, a second date isn’t completely out of the question. Remember that second dates are for deepening the connection and talking more.

When you run out of conversation topics in 10 minutes because it’s obvious that you and your date just don’t get along and aren’t on the same page, you can think about leaving. There’s one catch, though: you have to be classy and polite about it.

Sure, you’re probably going to tell a little white lie. The best way to do this is to excuse yourself and go to the washroom. When you get back to the table, say that you got a work email and you, unfortunately, have to go home and deal with it. Or say that you’re not feeling well. Your date is not going to push you on this. He will say okay. And if he’s a jerk about it, well, so what? You’ve already established that you don’t like him and don’t want to date him. It doesn’t matter what he thinks about it or what he has to say.

While it would be awesome if you never had a leave a date early, most people don’t have that kind of good luck. Sometimes dates are going to be bad and that’s something that you have to deal with if you’re going to be looking for love. If these five situations come up, you can definitely leave the first date early, even if it’s only been ten minutes. Always listen to yourself and do what you want. That’s the only way to be truly happy… and end up falling in love.

Do you ever leave dates? What is the worst date that you have ever been on? Share your thoughts with us in the comments below!