Christian Harris
Add Comment
Spice up your love life by indulging in your boyfriend’s sexual fantasies. Get him to tell you them or just read on to find out the sexual fantasies he has.

In life it is normal to have desires and fantasies that are about anything and everything.

It is also normal to have plenty of sexual fantasies, yet despite this being part of human nature people find it hard to discuss them.

In fact, a lot of men have even said that when they do mention their sexual fantasies, they feel embarrassed, rejected, or shut down.

This then leads to them just not admitting their sexual fantasies due to the reactions they have experienced by others in the past.

It is important to be open to trying new things as it will help spice up your love life, and you will satisfy your boyfriend in a way he has never experienced before.

Read on to learn the most common sexual fantasies your boyfriend may have! 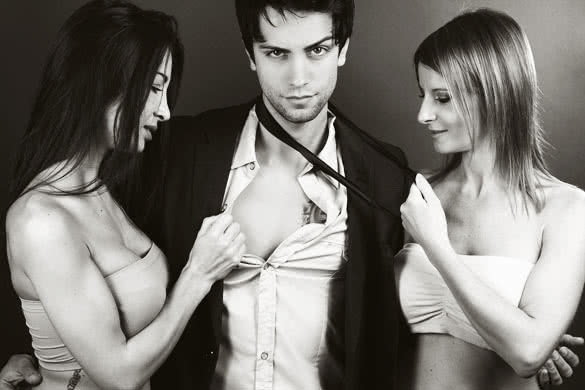 A lot of men have revealed that they really want to see their woman all over them, but also all over another woman.

They want to be able to sit back and watch as they both get into it, and to then jump in and enjoy it by also experiencing that sense of physical intimacy.

Another common sexual fantasy men have, is the wanting of the experience to hire a hooker, a high-end escort, or watching and then getting a private dance from a stripper or a dancer.

Men seem to be interested in the thrill of this and all the exciting features they would get from having sex with a woman who does this occupation.

He would be able to tell her what to do, how to do it, what he wants to see, and to be in control while being with a sexy temptress.

Fear not, to those women who don’t want their boyfriend with another woman. You can satisfy this fantasy for your man by doing these roles your self!

Like everyone, boyfriends also want what they can’t have. There’s a certain lure about a woman who is taken, or just not interested because men love the chase and want to win.

They want to compete, and work for their reward. In this case, their reward would be getting the woman they couldn’t have and having sex with her.

They want to pleasure their partner in their car in a darkly lit parking lot in the middle of the night.

A lot of boyfriends dream of getting stuck in an elevator with their girlfriend.

They also fantasize about then taking her right then and there. Hot elevator sex, like parking lot sex it is risky but is also very steamy and sexy.

Picture this, a beautiful evening out, some wine with your amazing meal sounds great right. Now picture bathrooms that are very easy for the both of you to sneak into.

Like elevator sex or parking lot sex, boyfriends also share the common sexual fantasy of sneaking in and out of a restaurant bathroom undetected so they can have fast, hot, and amazingly passionate sex with their partner.

Another sexy feature of this fantasy is the fact that the two of you have to be quiet, and will have to try different positions than the usual ones you do while in bed.

A common sexual fantasy that men have is where they become the hero. This fantasy is one that you see in the moves.

The man leaving his apartment, he hears a woman screaming for help in an alley, and he saves her. He then brings her back to his place to help clean her up and give her medical attention.

After he sees a big wound on her back he asks if he can clean it, so her shirt comes off and he has to move her bra straps. After he cleans it, they start making out and things get physical very fast.

Yes, that does sound like the Buffy and Angel moment from Buffy the Vampire Slayer, and it is a common sexual fantasy your boyfriend may fantasize about constantly.

They want to be the hero, the spy, the prince, or any role that involves them saving their girl, and then getting a sexy reward.

A lot of boyfriends also have the sexual fantasy of watching a woman from a far get undressed, and then pleasure herself.

However, a lot of boyfriends also have sexual fantasies about being the one who’s being dominated.

Men love doing the work, but sometimes they also want to be the one to do no work and receive lots of pleasure. Men also have the fantasy of the women telling them what to do while they take charge.

A common sexual fantasy boyfriends have is to take a woman’s virginity.

They want to be that guy who was just too attractive, handsome, sexy, or had the best personality which resulted in them being the girls very first.

He wants to watch

Boyfriends have admitted that as much as they are over protective and do get jealous, they also have a sexual fantasy of watching their girl have sex with one of their friends.

This sexual fantasy is one most men say they will never do and will never tell anyone. Yet, they still admit that this would be one of their sexual fantasies that they consider the hottest.

Last but not least, boyfriends fantasize about having cleavage sex. This is when the man puts his penis between the woman’s breasts and either she moves up and down or he thrusts into them until he orgasms.

Men have lots of sexual fantasies. Some others which tend to be common would be role playing.

Men want to have their woman as the sexy cop, doctor, or teacher. However, some men also want to be those characters in their own fantasy.

Either way, these characters your boyfriend has plenty of sexual fantasies of, can easily be done. Once you get the right attire, the persona will come naturally.

Some more common sexual fantasies your boyfriend may have are making their partner orgasm while driving, or them having an orgasm as they drive.

Men love to be sexually pleased, and they also love to please. However, if you try your boyfriend’s sexual fantasy, he will be pleased in a way he has never been before.

So embrace your boyfriend’s sexual fantasies and give it a try. It will add to your sex life and even your partnership.

If you can think of any other common sexual fantasies your boyfriend may have, feel free to share!

How Long Should I Wait To Sleep With Him?
How To Be The Object Of Your Man’s Desire
Comment