Scarlett Robinson
Add Comment
The clitoris is indeed a mystery to many. In fact, I bet there a few things that even you don’t know about your own sex bud! You might learn something new from these facts.…

The clitoris is a fascinating, intricate and delicate organ that is the source of most men’s insecurities about having sex with a woman. Some of them prefer to pretend it isn’t there rather than admit that it terrifies the life out them, because not only may they not know how to work it, but often they don’t even know where it is or what it looks like!

It doesn’t help when a girl isn’t exactly clued up on her own clitoris either. How are you supposed to direct your man and receive mind-blowing orgasms and infinite pleasure if you don’t know what’s what? Check out these three things you didn’t know about your clitoris, until now…

1. Your clitoris is the equivalent of his penis!

It might be difficult for you to stomach, but the truth is that when you pull it apart, your clitoris really is the equivalent of his penis. Did you know that when babies are born, they all have the same genital tissue?

Depending on whether the baby is a girl or boy, the tissue develops into a penis or a clitoris, but essentially the clitoris has all of the components of a penis: it has the glans, a tiny shaft and even a foreskin!

Fun fact: Did you know that although the average clitoris is a mere fifth of an inch long and just over a tenth of an inch wide, the clitoral tissue actually reaches much further and most of it is hidden inside of your body.

In fact, it can often reach around four inches, which is about the size of a man’s penis when it’s flaccid. The longest that has ever been measured and recorded was a massive twelve inches long! Impressive, eh? So, don’t underestimate your little bud; pleasure can be felt deep inside of you for a reason.

You can use this information to your advantage the next time you have to give a guy tips on how to get you off. Tell him to imagine that your clit is similar to his penis. i.e. super sensitive at the end! Suggest that he tries to stimulate the head of your clit in a similar manner to the way he stimulates the head of his penis by rubbing the foreskin, or hood, gently over the head of your clit to create gentle friction—obviously with plenty of lubrication.

Suggest that he uses his thumb and forefinger to gently pinch the hood of your clit, pulling it gently and rolling it between his thumb and finger, using a variety of different speeds and directions.

If his fingers are too wide or your clitoris too small and hidden, get him to place the pads of one or two of his fingers on the hood and gently rub up and down or around, depending on what you like best, so that the sensitive clitoris underneath is stimulated. Make sure his fingers are well lubricated and let him know when it starts to feel good.

2. Get more pleasure from your clitoris.

There are so many different ways to stimulate the clitoris. If you are patient and open-minded, you can almost certainly find new ways to get pleasure from clitoral stimulation.

Here are a few ideas to get you thinking outside of the box:

Most good quality sex toys have a variety of different speed or pressure settings, so it is a good idea to start off slow. Some women have very sensitive clits and will even need to place a piece of soft material between their clit and the sex toy to dull the effect and build up to a level of stimulation they can enjoy. You just have to shop around and try new things. 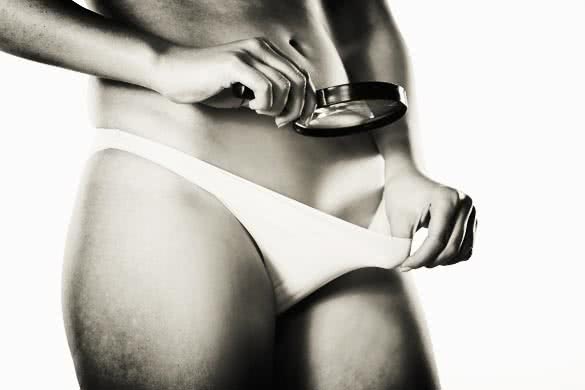 Unfortunately, size does matter. It is a fact that girls with smaller clitorises are known to find it more difficult to orgasm.

However, that doesn’t mean that if you have a tiny clit that you can’t achieve the mind-blowing pleasure that other women with larger clits can achieve more easily.

In fact, because of the time you have to put into your orgasm, the payoff can often be a massive and wonderful release—good things always come to those who wait!

The important thing to remember is that half the job of reaching orgasm is being turned on. The more turned on you are, the more blood is already surging towards your clitoris, making it feel extra sensitive.

So, make sure that you invest in your foreplay. Don’t forget to make use of your imagination, too! For women, a lot of the pleasure you get will come from mental stimulation. So make sure you know what turns you on, and share ideas with your boyfriend so that he knows how to turn you on too! Talk about your fantasies; let your mind speak to your clit before anyone’s fingers or tongue go anywhere near it.

Tip: Many women find that they get even more turned on and hungry with desire when the actual physical stimulation is delayed. So, rather than have your boyfriend spend two hours trying to stimulate your clit with his tongue until it is numb and you can’t even feel it anymore, tell him straight that you like being teased!

The less contact with your clit and the more prolonged it is, the more sensitive and hungry your clit will feel. Experiment using different fabrics and materials to heighten your body’s sensitivity. Light scarves and feather can make amazing sex toys and are the perfect tease.

Perhaps the most interesting thing about your clitoris is the fact that it literally only has one purpose: to provide you with pleasure. That is it’s only function! So, make sure you explore your clitoris’s potential thoroughly, and learn as much about your own body as you can so that you can guide your sexual partners and enjoy mind-blowing sex together.

The Art of Sexting: When Sex Meets Texts
6 Alternative Places to Get Down with Your Partner
Comment